Dungeons and Dragons Fifth Edition will be turning five years old shortly and as I write this we are days away from the fifth anniversary of the release of the D&D Starter Set for the game. Wizards of the Coast has released a new starter boxed set, dubbed the D&D Essentials Kit, but is it worth your time and money to journey to your FLGS (or, um… Target… smh) to pick up a copy? If you have the Starter Set, do you need the new Essentials Kit? Let’s dig through the boxed set and find out. 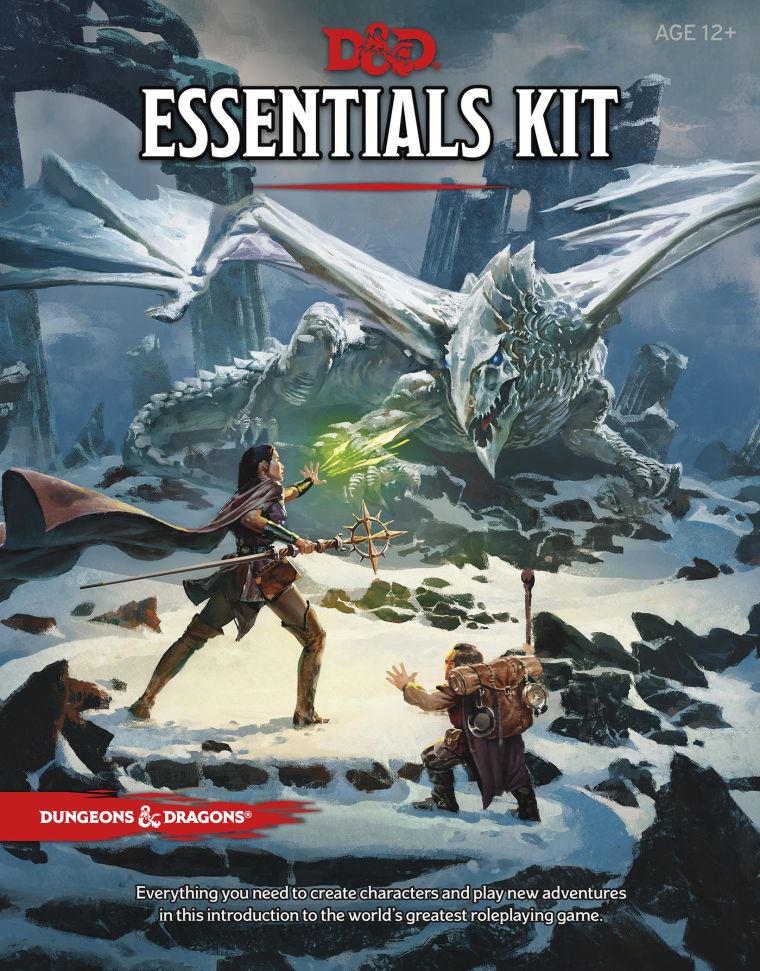 The basics… What does the D&D Essentials Kit include for it’s $24.99 price point?

The D&D Starter Set was $19.99 but it only included a 32-page rulebook, an adventure, 5 pregenerated characters, and 6 dice. At a glance, this makes the D&D Essentials Kit look like a bargain. You’re definitely getting more bang for your buck but are the contents of the new boxed set worth it? Let’s take a look at the quality!

The first thing that caught my eye when I opened the new boxed set was the dice. They’re some nice red gem dice with bright white lettering. Color contrast on the dice is “essential” (pun intended) when your eyes are starting to get old and tired like mine and I think WOTC picked a great combo. They also included two 20-sided dice and four 6-sided dice which I think was a very smart inclusion as well. Advantage and disadvantage rolls are some of the most used mechanics in D&D 5E and the extra d20 is nice. That is actually something I think they missed the mark on in the D&D Starter Set which only had a single d20. D&D 5E also uses a lot of d6s so the extra d6s was cool.

In the boxed set, the 72 cards mentioned above come in sheets with perforated edges you can easily fold over and tear loose. Good for packing and shipping but a little sloppy in final form. This is not a deal breaker by any means. There is also a card box for the deck which I really, really like. There are 9 initiative cards (labelled appropriately, one through nine), 3 combat cards to pass around which explain the game’s combat round, 15 condition cards (one of which is unique to the adventure, NO SPOILERS), 9 cards for the sidekick NPCs from the adventure (with character art), 36 magic item cards (with no art, small missed opportunity there but forgivable), and 9 quest cards.

The rulebook and adventure module are well constructed. The pages are thick and glossy which makes the art pop and the sturdy softcover binding means these books can see a lot of use at the table without worrying about them falling apart. I only highlight this to contrast the flimsy construction of the books in the D&D Starter Set which began to fall apart after a decent amount of use. You’re not going to have this problem with the books in the Essentials Kit.

Looking specifically at the rulebook, first I want to say I really, really like it. Its contents really are the “essentials” of the D&D Player’s Handbook. The races covered are dwarf, elf, halfling, and human. The classes covered (up to level 6, the Starter Set only goes up to 5) are bard, cleric, fighter, rogue, and wizard. I am happy to see the bard included alongside the four iconic classes. The backgrounds covered are the acolyte, criminal, entertainer, sage, and soldier. The spell options are limited to those available to characters up to level 6 but that makes perfect sense to me. Aside from that, all the rest of the core rules are here. This doesn’t appear to be a simplified version of the game like is done in some beginner boxes. This is D&D 5E with limited race, class, background, and spell options so it would fit into a smaller book. This is a great product to hand to a new player and say, “Skim this to get started.”

In fact, aside from using it as a tool for beginners, I think this is a great tool to use at any table as a rules reference. It is smaller and easier to flip through to find rules than the larger PHB.

I like the sidekick’s sub-system included in this rulebook. It’s simple and makes sense. It provides easy rules for sidekick advancement as they gain experience and levels. In fact, it is the same as the house rules I have been using in my own games although the advancement rules are a nice addition. Two thumbs up for Appendix A: Sidekicks.

Phandalin is your base of operations for the Dragon of Icespire Peak, or at least, that is where you will be beginning this adventure. The PCs will find adventure in the area using the town’s job board on which quests pop up and disappear as the adventure continues. There is a trio of quests to begin the adventure and when two of those have been completed, the PCs find three new quests have been added. When two of those are completed, another three are added. These quests provide a myriad of interesting challenges and an equal number of interesting rewards. Eventually, the PCs will answer the call to hunt a dragon who has been terrorizing the surrounding territory and they may even encounter the dragon once or twice along the way. 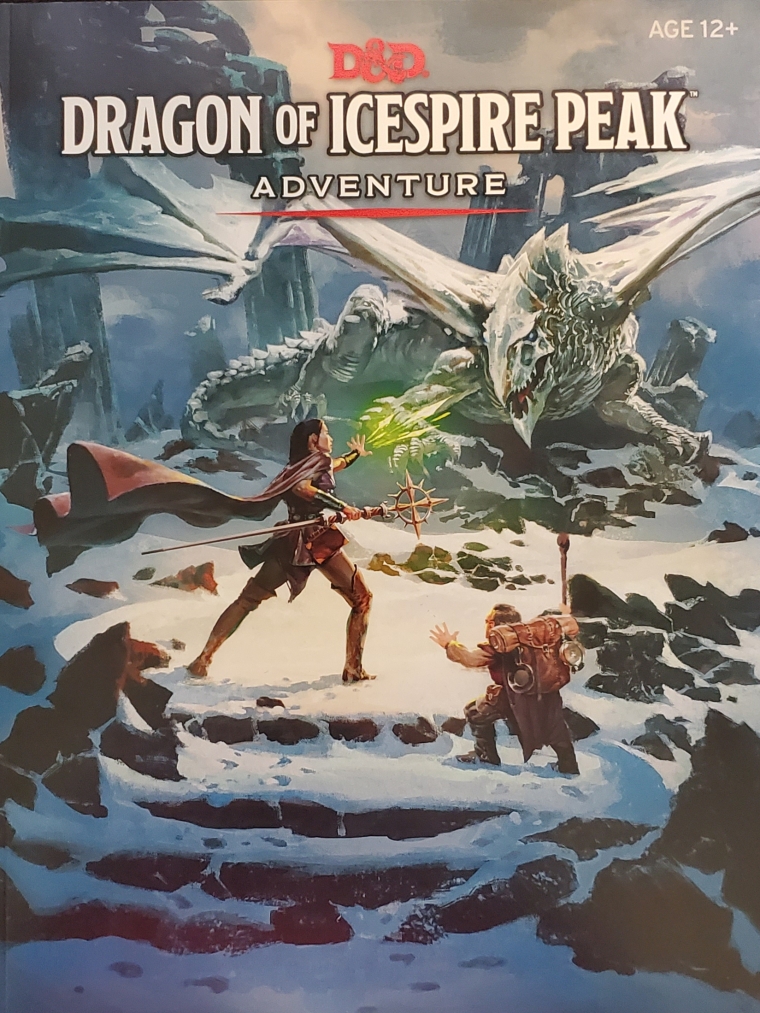 Honestly, it is a bit of a misnomer to call Dragon of Icespire Peak an adventure. It is really a sandbox-like mini-campaign. Each of the quests includes their own dungeons which are packed full of challenges, NPCs, and stories all their own. I would call the quests the adventures and the adventure is a campaign. That isn’t a complaint as much as it is an observation and a nod to the fact your group is going to get a lot of play time from this product. That is awesome.

Also included in the product are the codes for D&D Beyond content. Full disclosure, I am fully aware of the parts of the community who are not happy they pay for the physical books and then have to pay again for the content if they want digital copies. I completely understand that point of view and I admit, I don’t like having to pay for everything twice either. We all understand the business relationship between WOTC and Wikia/Curse but, to be frank, it sucks for us, the loyal customers. That said, I do pay for the digital content on top of the physical copies and it was nice, for once, to get a digital copy of a product without having to pay extra. Including the codes was a strategic business move and I think it was a smart one. What better way to encourage potential customers to buy your product than to give them part of it for free? I can’t think of one. However, this comes across as a bit of “salt in the wound” to some customers.

In short, I like that a digital copy of the adventure was included with D&D Beyond. I wish WOTC and Wikia/Curse did more of that or maybe WOTC could find a way to ditch Wikia/Curse and offer the digital content on their own. I know, I know… There are contracts and legal issues. I guess I am dreaming for when Dungeons and Dragons Sixth Edition comes out. I digress…

After looking through this product and comparing it to the D&D Starter Set I kind of realized I was approaching it from the wrong angle. The Starter Set was published before D&D 5E’s release and it was meant to help gamers get started before they could actually get their hands on the full game. It served its purpose well. The D&D Essentials Kit is an entry point for new players now that D&D 5E has been in the market for half a decade while also serving as some great content for folks who are already playing the game. I am very happy with this purchase and I look forward to running Dragon of Icespire Peak for my players… Someday… It’s on the list! I swear it!

Have a great weekend everyone!