Watch the game session on YouTube at https://youtu.be/V54ppY2yInU. Osteth began lobbying for the PCs to destroy the Stellar Degenerator but before they could respond they realized hidden defenses across the […]

Osteth began lobbying for the PCs to destroy the Stellar Degenerator but before they could respond they realized hidden defenses across the system had come to life with the Corpse Fleet’s arrival. The PCs spotted the infamous Blackwind Annihilator, the flagship of the Corpse Fleet, and one of only three capital ships like it. Several shuttles disembarked from the Annihilator. One shuttle began an intercept course for the controller moon on which the PCs were currently located and the rest went in the direction of the Stellar Degenerator.

Ryder wondered if the PCs could just close the gate and call it a day but Cypher pointed out the ship had already drifted out of the demiplane, “You can’t put the toothpaste back in the tube.”

Osteth asked if he could be released from Cypher’s restraints. Ryder argued fervently they should free Osteth but Cypher could not find in himself to trust the AI. The group left with the AI still confined.

The Starfinders rushed into the jungle surrounding the control center and decided to cut a line straight for where Wesley had hidden the Raza earlier. Unfortunately for them, the foot soldiers of the Corpse Fleet had surrounded the facility and the PCs were forced to fight their way through. The battle begins at 18:28 in the video. 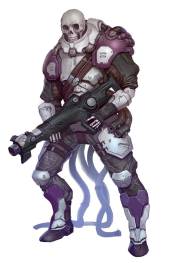 The PCs spread out and began firing on the corpse fleet commandoes who were blocking their retreat. Switch and Drez charged forward to form the frontline when Nuil revealed a newly acquired spell on incredible power. She summoned a massive wall of fire and strategically laid it across the battlefield to hit all of the attacking undead. Magical flames tore through them but one of them charged into a safe spot and fired on Nuil. He clipped her and her wall of flame disappeared. Apparently, they were well trained in combat with magic users but the damage had been done. The commandoes were mostly dead. Cypher went invisible and went all Predator on the corpse fleet commandoes. The Starfinders finished off the commandoes.

In a clearing of razed flora, they found the shuttle unguarded. Examining the ship as they approached it they realized a unique feature of Corpse Fleet vessels. The insides of the ship would be completely exposed to the void of space outside of an atmosphere. Onboard, the only “living” thing on the ship is a zombie with shriveled vestigial limbs and necrografts implanted in its cranium. Cabling from its skull ran into the controls of the shuttle.

Cypher plugged into the shuttle’s systems with Nuil’s help and discovered the Corpse Fleet technology was more advanced than he knew. It seemed the technology they had encountered on Eox was a pale shadow in comparison to the tech used by the notorious fleet. They quickly set about unlocked all the systems in the shuttle and identified it as Barrow Dirgesinger called the Blackwind Sepulcher. Cypher and Nuil rigged it so they could remotely pilot the craft.

Inspiration hits and Cypher gets the idea they can crash the shuttle into the Blackwind Annihilator and use it as a distraction while they head to the Stellar Degenerator aboard the Raza. Time for some kamikaze!

They rush the rest of the way to the Raza and both craft lift off from the moon. The first thing the crew does is cloak the Raza. They “flew the shuttle casually” and identified the bridge of the Blackwind Annihilator and set the shuttle on a roundabout intercept course. The flagship hailed the shuttle and inquired why it was returning early and if the crew of the shuttle had dealt

with the Starfinders. Ryder modulated his voice with his implant and feigned arrogant incredulity. The flight controller scolded Ryder and ordered him to land and resupply. The Corpse Fleet planned to send teams to disable the star system’s defenses.

The crew of the flagship did not recognize the danger until it was too late. Cypher brought the shuttle around and rammed it into the command deck of the Blackwind Annihilator. A giant ball of flame erupted from the bridge and the capital ship began to list. The smaller ships surrounding the flagship took evasive action and began searching for other attackers but the Starfinder’s cloaking field kept them hidden.

The Raza took a wide berth around the searching Corpse Fleet ships and closed with the Stellar Degenerator. They quickly located an open docking bay and approached. Inside they spotted four Corpse Fleet fighters, a small contingent of commandoes, and a Corpse Fleet officer in a control room overseeing a trio of cyber-zombies like the one they found on the Corpse Fleet shuttle.