To watch the game session on YouTube, visit https://youtu.be/M22opPvWpig. ​Kymber joined the group and is playing Zaleria (female human solarian who grew up with the Free Captains). Note: We spent […]

To watch the game session on YouTube, visit https://youtu.be/M22opPvWpig.

​Kymber joined the group and is playing Zaleria (female human solarian who grew up with the Free Captains).

Note: We spent a little bit making a cooler token for Nuil’s nano-swarms. It took a couple iterations but the group picked a cool pic.

Stephen did a great Cypher impression. Switch, Drez, and Nuil went to walk the perimeter.

Wesley and Ryder searched the tent and found 7,080 credits. They also located a very simple tier 1 datapad which Cypher quickly hacked into. The datapad reveals the marrowblight’s name was Xerantha Mortrant and she was recruiting Eoxian dissidents for the Corpse Fleet. She was working with someone named Captain Zeera Vesh, a name Ryder recognized from his time as a slave. He grudgingly reveals his past to the rest of the crew and his concerns about facing Captain Vesh. He recalled she was a vampire with some unique abilities and weaknesses. Her weaknesses included an aversion to a bowl of cooked rice.

Cypher remarked, “That is a messed up childhood.”

Wesley searched Xerantha’s body and found the thunderstrike streetsweeper sonic longarm she had dropped at the end of the battle.

The PCs were too far from Orphys to tap into the InfoNet but Cypher used a comm dish Xerantha had mounted on her tent to boost his signal. While Cypher hooked up his gear, Drez returned from his patrol. With the boosted signal, Cypher finally taps into the InfoNet and begins scouring it for information about Captain Vesh. After an hour, he finds a secure mobile data node which has worked very hard to keep itself invisible on the net. Cypher nails it down and breaks through its defenses. Inside he finds a series of orders directing Corpse Fleet activities in Orphys. Finally, he finds a message from Vesh herself giving orders to gather her forces at Skullcap Gorge. She plans to launch one final assault against the PCs to end those “blasted Starfinders!” The location is 7 clicks from their current location. The crew debates their course of action for a bit and decides their window to take advantage of this information is small so they go on the offensive.

As the crew starts moving towards the Skullcap Gorge they notice a humanoid figure moving through the hills nearby following them (Zaleria). Ryder slides behind a boulder and waits for Zaleria to pass. He steps out his laser pistol drawn and said, “Why are you following us?”

Zaleria responded, “Well, I was sent here to help you but you didn’t seem to need the help.”

Ryder asked curiously, “Send here by whom? Clearly, anyone who knows us knows we don’t need help.”

Zaleria rebutted, “Well, tell that to the Free Captains.”

With that, Zaleria explains she was sent by Captain Allera Okwana who felt obligated to send them aid according to the Free Captain Code. It’s an honor thing. Cypher was suspicious but Wesley was enthralled with the idea that Allera had sent someone to help “him.” He was disappointed to hear Allera hadn’t mentioned him by name. The rest of the group introduced themselves and Ryder gave a quick overview of their quest. Wesley thought the group was sharing too much (or his feelings were just hurt, hard to tell). Ryder got the impression Zaleria was being sincere with the crew and when he sized her up, he realized she was a solarian which means she was probably good in a fight.

Despite mixed (and hurt) feelings, the crew proceeded with Zaleria at their side.

Note: I got suckered into the group having a second ship which is how Zaleria made it to Eox. That needs to be worked out, lol.

As the crew approached Skullcap Gorge, they noticed the hills which formed the gorge we actually enormous piles of corpses left her long, long ago. Despite the macabre nature of the hills, they searched for a path to allow them to approach the gorge stealthily. The rest of the crew negotiated the hill and Cypher used a combination of his jump jets with his new haste module to make his way to the top. 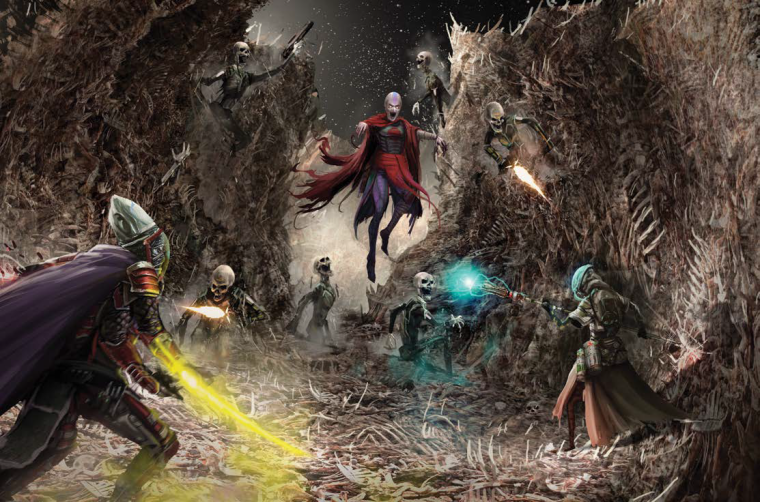 After some quick planning, the crew launches a surprise attack. The battle begins at approximately 1:25 in the video on YouTube. The crew defeated Vesh and her minions (Ryder got to land the killing blow on Vesh!) and the group began to rummage through the Corpse Fleet’s bodies for loot as we ended the session.

Note: Removed the Fleet feat from Zaleria and gave her Order of the Empty Orbit. This feat enables her to use her supernova ability and only target her enemies. This should turn the “avoid the ticking time bomb” approach to “fighting bravely side by side with the solarian.”​